Reasons to Pick US –

⤷ We are FULLY INSURED

⤷ Our prices are Reasonable

⤷ Customer Service is our #1 priority

⤷ We have a LICENSED Wildlife Rehabber on staff

⤷ We will explain everything

…WHO else does all of that?

It is that time of the year! Bats in the gable vents or attic are a common issue in Georgia. Bats are protected! Call us we can help Quickly get the bats out - the right way!

See! It doesn’t have to be terrifying and traumatizing to the critters we relocate. Why try our best to be gentle. ... See MoreSee Less

Anyone who provides goose control services and appreciate this meme created by a Humane Society. Geese make such a mess! #goosecontrol

Not all exclusions are created equal. We would love to share our expert opinion on wildlife exclusions. The do’s & don’ts.

Our family business goes above & way beyond.

We get Possums OUT & KEEP them OUT!

Opossums are not as confrontational as Raccoons but because they are opportunistic scavengers, they can come into conflict with people. They’ll steal garbage, pet food, etc. They can distress pets, and if a dog corners one, it can get a nasty bite. They can spread fleas and other parasites. Most of all, they often like to live in human structures, such as under sheds or decks.  Occassionally an opossum will get into an attic.

Opossums actually don’t often carry rabies. They have a lower than average body temperature, and the virus doesn’t survive well. They do carry a large amount of parasites, however, and thus are carriers for the diseases that fleas and ticks can transmit. They also leave a lot of droppings, which pose the usual excrement health risks, such as leptospirosis or Salmonella.

WHY HIRE US TO TRAP OPOSSUMS

While overturned waste containers and raided fruit trees are just a nuisance to homeowners, it can cost several thousand dollars to repair damage caused by the use of attic space as dens. There are laws regarding the trapping, releasing and dispatching of Opossums in Georgia. There are health risks not only in the interaction with the animal but also in releasing an unhealthy one for others to deal with.

We charge a flat rate trapping fee per week for Opossums (actually for all animals except beaver, coyote & bats.)  There is NO set up fee, NO per animal fee, NO need for an estimate or quote –simply call us.  The trapping fee is all inclusive. We come out every single day to set the traps, check the traps and to relocate animals trapped.  It is the law in the State of Georgia that the traps are checked every single day – No exceptions. Thus far every one of our Opossum Trapping jobs have been successfully completed within a One (1) Week timeframe.

If a Opossum is in your fireplace, in your basement or crawlspace or running around inside your house… we will come out and spend up to an hour trying to remove the Opossum.  We have 100% success rate of hand catching all Opossums that we have been called out to remove!

Since no two homes are alike, no two exclusion proposals are the same price.  Exclusion is the act of using animal proof materials, devices and methods to keep the animals OUT.  Once Opossums are taken out, they leave behind odors, feces and scents which may attract other Opossums or critters.  If trapping alone  (without exclusion) it just clears the way for the next  Opossum to find their way in unless you block off its ability to “Get back IN”.  In the full home exclusions the most common entry areas for all critters are:

However, with all of the standard exclusion information said… Most of our possum calls involve them digging under decks, getting in crawl spaces and causing problems with domestic pets in fenced yards.

Related Wildlife Articles we have published:

Alpharetta Opossums Are Living Under My Deck – Possum Control

Opossums often find themselves a safe home, free from predators and with a good source of food by digging under our decks, getting into our crawl spaces and even sometimes getting in our walls. Unlike a… Read more 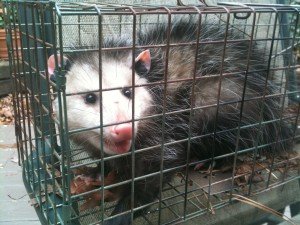