Reasons to Pick US –

⤷ We are FULLY INSURED

⤷ Our prices are Reasonable

⤷ Customer Service is our #1 priority

⤷ We have a LICENSED Wildlife Rehabber on staff

⤷ We will explain everything

…WHO else does all of that?

Our team is willing to take every measure to prevent critters from getting inside. With our family business it isn’t just a paycheck it is our purpose.

Bat Removal is what we specialize in, however, once the bats are removed and the home is sealed to prevent them from coming back inside there may be an extra step that is required…

Did you know that there is a bug that feeds on bats blood. Yes, it is actually related to the common bed bug. Unlike the common bed bug, however, bat bugs do not prefer to feed on human blood, though they will if need be.

Bat bugs develop in colonies of roosting bats, which sometimes occur in attics or behind walls of buildings. Bat bugs may move into human living areas and incidentally bite people, with such migrations particularly common when bats migrate away from or are excluded from the building. However, in the absence of the bat hosts, these insects cannot sustain and reproduce.

However, in the immediate period after bat removal, problems may temporarily increase as existing bat bugs migrate in search of new hosts.

If you have bats, we can humanely get the bats out & keep them and the bat bugs out.

Margie Hagan just thought you should see this.

Our family wishes you & your family to have a safe holiday. Thanks for your continued support.

We can help quickly & affordably to resolve your nuisance wildlife issues.

We apologize for our recent absence on social media, we have experienced multiple losses in our immediate family over the past couple of months and we have done all we can to push through these tough times. Thanks for your continued support. We couldn't exist without you! ... See MoreSee Less

Hope everything goes well My condolences

Before we outline our Mole Trapping Services.  We wanted to touch base on the life & times of a typical mole.  Understanding your lawn’s enemy helps to conquer the battle and take control back of your yard.

It is amazing what damage a mole can do to a beautiful lawn.  How quickly they can destroy a yard is surprising.  Our mole control services can bring you quick relief. This is one of the few services that can cross-over between wildlife control & pest control.

Moles spend almost all their lives underground in a combination of a semi-permanent and permanent system of tunnels. The surface tunnels are short-lived and usually occur in areas of light sandy and shallow soil, where their food (grubs & worms) is closer to the surface. What you do not see is typically a system of permanent deep burrows which form a complex network hundreds of meters long at varying depths in the soil. The deepest tunnels are used most in times of drought and cold temperatures. Permanent tunnels are used repeatedly for feeding over long periods of time, sometimes by several generations of moles will use the tunnel system.

Earthworms are the most important part of the mole’s diet.  Here is a surprising fact – A mole eats well over half their body weight in worms each day.  Moles also eat many insect larvae particularly in the summer, though earthworms dominate the winter diet.  Moles sometimes collect and store their food (earthworms) alive in special chambers. The stored worms are immobilized by a bite to the head, AMAZINGLY almost 500 worms have been recorded in one chamber.

Here is the reason why homeowners are always shocked when we tell them it is probably one or two moles causing the damage – Moles are solitary for most of the year, occupying exclusive territories. With the start of the breeding season, males span out, tunneling over large areas in search of females. Within the network of tunnels, moles construct one or more spherical nest chambers, each lined with dry plant material. Nests are used for sleeping and for raising young. A litter of 3 or 4 babies is born in the spring. Their fur starts to grow at 14 days, eyes open at 22 days and they are weaned at 4-5 weeks. The young start to leave the nest after 30 days and disperse from their mother’s home range at 5-6 weeks. 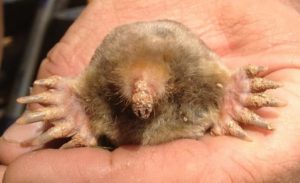 Our approach to controlling a mole situation usually involves Two (2) standard measures:   Trapping & Baiting.  If you want to be proactive and increase the chances of the trapping being effective, you could go walk in your yard and press down on the tunnels.  Therefore, when the tech arrives all tunnels that are present are active tunnels.  This allows us to have laser focus and make the most out of your trapping.

MOLE TRAPPING:  The first step is setting traps in the active tunnels.  These traps are designed to kill them quickly underground & humanely.

MOLE BAITING:  When appropriate we can  strategically place mole bait underground to attract the moles and once they eat the bait they die.  We flag where there is bait and have a method to retrieve bait before we leave if they have not taken the bait away.  Either way, the problem is resolved.

We charge a flat-rate fee for our mole control services and we have found this to be the most we can do as humans to have the upper hand in controlling the mole population in our yard.

This is either booked as a one-time treatment or a series of 4 visits:  (Typically Initial Visit, Day 1, Day 3 and Day 7)

MOLE GASSING: When the situation is appropriate, we can utilize equipment designed to kill moles in their tunnels using a carbon monoxide gas.

Benefits of treating with Carbon Monoxide can include:
•  Direct targeting of rodents within the burrow system.
•  No reliance on bait acceptance that sometimes hinders rodenticide and trapping efforts.
•  No secondary toxicity concerns for scavengers and predators.
•  It seldom requires handling of animals after treatment, which reduces the risk of disease and parasite transmittance to humans.
•  It can be highly efficacious.
• Designated as a pest control device by the EPA. 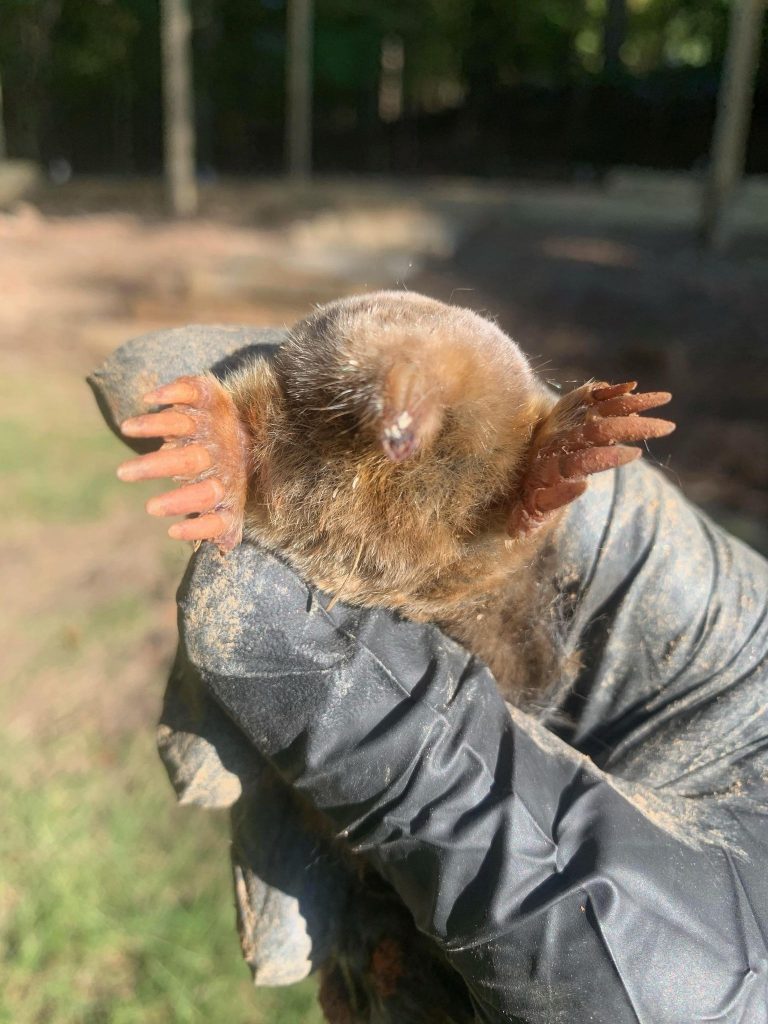 The mole lives in the seclusion of underground burrows, rarely coming to the surface. Although most people believe their yard is overrun with moles, moles are considered to be a loner. On several occasions, two or even three moles have been trapped at the same spot, but that does not necessarily mean they had been living together in a particular burrow. Networks of runways made independently occasionally join otherwise separate burrows. Because of their food requirements, moles must cover a larger amount of area than do most animals that live underground.  In wet weather, runways are very shallow; during a dry period, they range somewhat deeper, following the course of earthworms.

Did you know moles spend most of their lives alone and underground in their tunnels? Moles are such loners, in fact, that three to five moles per acre is considered a lot.  Moles spend their time digging tunnels and hunting for food. A permanent tunnel is usually about 2 inches in diameter and 8 to 12 inches below the surface, while temporary tunnels are usually right under the surface of the ground.

It is a misconception that moles eat the roots of plants. They are actually after the earthworms that are found in garden soil. Moles love earthworms so much that they eat nearly their body weight worth of earthworms per day.  Moles also consume insect larvae (grubs).

Call us – there is hope!