Facts about Copperhead Snakes in Georgia

OUR COPPERHEAD SNAKE REMOVAL SERVICES:  When we are hired to perform our snake removal services, the search for snakes begins. Sometimes they stand out and sometimes you have to make a real effort, understanding snakes and their typical behavior to know where to look.  In this situation the homeowner never suspected the snake moved from the yard into their utility room.  Here it was hiding right in plain sight.

The Homeowner walked right past this door just 15 minutes before the Wildlife Technician came through to inspect and the snake never moved.  It is our professional experience that these snakes, Copperheads, are the most docile of the snakes that we have to interact with in North Georgia. 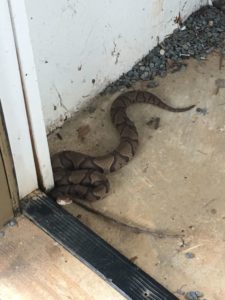 REASONS TO AVOID CONTACT:  According to the latest reports in our industry, a typical Copperhead snake bite results in a hospital stay costing somewhere in the ballpark of $125,000.  Yes! One Hundred Twenty Five Thousand US Dollars.

It has been estimated that 7,000–8,000 people per year receive venomous bites in the US, and about five of those people die.  Most fatal bites are attributed to the diamondback rattlesnake. Because Copperheads are common in forested habitats and are well-camouflaged, copperheads are responsible for the majority of the snakebites in the Southeast each year. Luckily, copperhead venom is not very potent and deaths from copperhead bites are exceedingly rare. Most snake bites occur when someone tries to kill or harass a Copperhead, so the best way to avoid any bite is to leave all snakes you find alone.

I am including a link to a report of the snake bites; Please note each one of the causes of the bite: Details of Fatal Snake Bites.

COPPERHEAD BEHAVIOR: Copperheads can be found during the day or night, but forage primarily after dark during the hotter parts of the season.  It may give someone a false sense of security thinking that there aren’t any copperheads in their yard because they are not seeing them during the day.  Let’s just say we work different shifts so you would seldom see them.

Copperheads are opportunistic feeders and are known to consume a variety of prey, including frogs, lizards, snakes, small mammals, birds, and insects.  Mostly they sit motionless to ambush whatever happens by, but when they have to go seek out food, they use their heat seeking ability to track down their prey.

Copperheads are social and one of the few snakes that may spend time with each other, and often with Black Snakes, as they can hibernate together during the winter months.  They tend to return to the same den year after year.  They are believed to migrate late in the spring to reach summer hot spots for feeding and reverse this path in early fall.

COPPERHEAD REPRODUCTION:  Copperheads mate in the spring, at which time males are on the move in search of females. Females give live birth to 6 – 10 (up to 20 depending on food supply) young in the late summer, typically reproducing every other year.  Young copperheads are 7″ to 10″ in length and grayer in color than adults. They have a sulfur yellow tipped tail, which fades with age and is lost by age 3 or 4.  The bright yellow tail tip is used to attract prey. This is known as caudal luring.  The tail resembles a small caterpillar or other insects and may attract a lizard or frog drawing it into striking range. 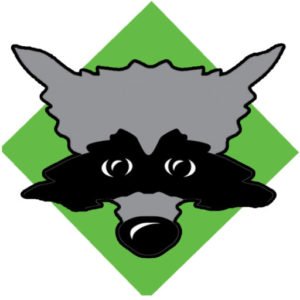 ← Game Camera Activity on Coyote Trapping job in Johns Creek, GA.
Noises in the attic? Could it be squirrels or rats in attic? →
Any questions give us a call!