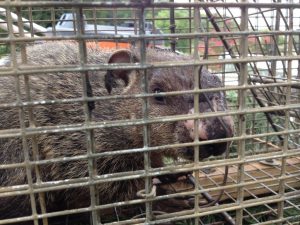 If you have a problem with Groundhogs / Woodchucks we have Groundhog Trapping services to assist.

Woodchucks, also known as “groundhogs” or “whistle pigs,” are far too familiar to many of us living in Dawson, Fulton, Forsyth, Hall, Cobb or Gwinnett Counties!

Since Woodchucks/Groundhogs breed at one year of age it is important to get ahead of the population explosion when you get a colony trying to establish itself on your property. Mating occurs in March and April with a 31-day gestation period yielding from 2-9 (usually 4-5) offspring annually. Although young are dependent upon the female at first, woodchuck pups are already independent at 8 weeks of age and able to survive on their own.

Woodchucks prefer open areas such as fields, clearings, open forests and rocky slopes.  However, they seem to gravitate toward areas that are more brushy or weedy in nature or areas that have received disturbance at some point and are now “grown up.” Areas such as fence rows, embankments, retaining walls, dams or kudzu patches make for excellent woodchuck living.

The damage caused from their burrowing activities can be quite problematic. Burrowing along sidewalks, driveways and building foundations can lead to serious damage to structures resulting in potentially costly repairs. Woodchucks also prove to be a nuisance to many gardeners as they can destroy an entire garden or flowerbed in a relatively short time.

Dealing with nuisance groundhogs can be frustrating.  Fortunately, we are licensed Woodchuck trapping experts and we can quickly relieve you of the nuisance woodchucks by trapping and removing them.

We charge a flat rate trapping fee per week.  There is NO set up fee, NO per animal fee, NO need for an estimate or quote – simply call us.  The trapping fee is all inclusive. We come out every single day to check the traps and to relocate any Woodchuck/Groundhog trapped.  It is the law in the State of Georgia that the traps are checked every single day – No exceptions.  Thus far ALL of our Woodchuck trapping jobs have been completed within One (1) Week time-frame.

One of the craziest calls we have received for Woodchuck removal was from a really nice and concerned resident in Buckhead who claimed she had a woodchuck stuck on her second story balcony.  To ourselves we thought “Yeah right”.  Although we know they are proficient climbers we did not really expect to see a Woodchuck.  Probably a rat or a possum or raccoon.  It happens all the time with clients confusing species.  When we got there for the Woodchuck hand removal this is what we found….